If you haven't read the books or played the games about The Witcher series, you might have more than a few questions about what witchers are and who a Nilfgaardian is. For the vast majority of those questions, there could be no finer resource than the canon Witcher Wikia site, where one can find articles on every imaginable subject in the series' world. To quickly get a better overall sense of The Witcher as a whole, however, we've attempted to do so below by responding to some of the more general questions.

What is The Witcher?

The Witcher is a heroic, low-magic, dark fantasy setting created by Andrzej Sapkowski which takes influence from Slavic myth and folktales, often delighting in retelling fairy tales with dark twists. It consists of stories that follow the adventures of individual characters as they make their way through a fantastic land, steeped in the medieval age fiction of knights and dragons. While it could be called heroic fiction for its focus on characters, the world depicted is rarely so bright and noble as that makes it sound. Kings and emperors throw away lives in squabbles over borders and territory, humans and elves murder each other in racial conflicts, and famine and plague (such as, quite literally, the Black Death) sweep across the land in the wake of frequent wars.

Magic, while widely known, is uncommon and often dangerous. Those born with the rare talent to wield it can be disfigured or killed if they can't learn to control it, and those who do are often looked on with suspicion as witches. Ambient magic is even more frightening; whole villages may disappear when a curse takes hold, and a person who dies traumatically or just under the right circumstances may reappear as a vengeful wraith the following night.

Finally, these lands are filled with as many monsters of every shape and size as there are mere men. Though they decline as civilization expands, straying beyond the city walls or bounds of the village is still far from safe. Scavengers prowl the corpse-strewn battlefields, giant predators lay claim to prey in their territories, and vampires whisper to lure the unsuspecting into dark, secluded alleys.

And yet—not every monster means the harm they do. The scavengers and predators are only doing what comes naturally, hunting and defending themselves to find a mate and continue the species. The vampires, at least the Higher kind, have consciences and don't always want to kill the humans they feed upon. Often, conflict with them doesn't have to end at the point of a silver sword. And not all monsters have claws and fangs—cruelty, greed, and hatred are just as common causes of death as a monster's hunger. So what do you do when a monster appears? You hire a witcher.

Who is The Witcher?

The Witcher novels and short stories follow Geralt of Rivia, a witcher. As humans came into conflict with monsters, there was a call for people who could get rid of them, and one group decided to make it a profession. Mages and scholars collaborated to augment humans (and a few elves) with superhuman abilities and train them in techniques developed for combating all sorts of monsters. It just so happened the augmentations, called the Trial of Grasses, only worked on children, somewhat distancing them from society. Marked by slitted eyes and two swords—steel for man, silver for monsters—on their backs, witchers were itinerant monster slayers, traveling from village to village to save the people from noonwraiths and ekimmaras—so long as the coin was right. Almost everywhere, witchers are scorned as vagabonds and worse until a monster needs slaying.

Often, Geralt finds himself in the company of mages, more commonly known as wizards or sorceresses. Though they can bend the world to their will with powerful magic, they too are looked on with fear and suspicion, with good reason. Magic will warp the body of anyone born with the talent into deformed hunchbacks or render them babbling oracles unless they are trained to control it by one of the few schools of magic. Every great monarch and wealthy lord needs an advisor to counsel them when a curse plagues their lands or a spell might save effort in destroying their enemies, so the graduated mages often enter the treacherous political circles of court. And, though treaties forbid such dark arts as necromancy, some mages will happily compromise their morality when a cruel experiment promises results.

It takes all kinds to fill out a world, and every one of them is sure to be complex. Elves and dwarves angry at their peoples' treatment by humans form guerilla bands called Scoia'tael who terrorize forests and settlements, pompous royalty gladly trample over the rights and lives of the peasants chasing the most minor whims, and religious cults like the Church of the Eternal Fire stoke the fervor of their faithful by inciting pogroms against anyone and everyone different and vulnerable. There are no out-and-out heroes here, as everyone has their own agenda they might be willing to commit evils for. The best of them simply try to choose the lesser of two evils.

Where is The Witcher? 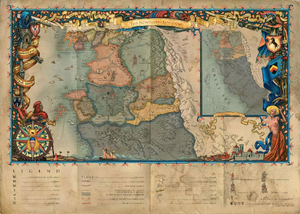 The Witcher is set, at least primarily, in a land simply dubbed the Continent in the region known as the Northern Realms. The four largest of these are divided by a crossroads of two major landmarks: the Pontar River which flows from the Blue Mountains in the Realms' furthest east to their natural western border on the great North Sea; and mountain ranges which are known as the Kestrel Mountains to the Pontar's north and the dwarven realm of Mahakam south of it. To the northwest of this cross is Redania, ruled by strong nobility beneath the red eagle banners of its royalty and their retained mages and spies. The powerful state has maintained strong alliances and a fair, progressive society until recently. Northeast, across the Kestrels, sits Kaedwen, whose proud knightly traditions have been cultivated under the Line of the Unicorns. Their kings war frequently with their neighbor southeast across the Pontar, Aedirn, vying for the fertile Pontar Valley and each insisting on using their own nomenclature for the region. Last but far from least, in the southwest lies Temeria, the silver lilies of its banners hailed as the Shield of the North, for they are the Northern Realms' first line of defense against their neighbors to the south: the Nilfgaardian Empire.

Until a mere few decades ago, Nilfgaard was only a small kingdom far in the south, beyond a half-dozen others like it. Now, however, their golden sun emblems rise over each conquered neighbor, the Empire's black-armored troops marching ever outward on the promise of holding dominion over the entire world. Their conquest is unending, only stalling long enough to make the First and Second Northern Wars seem distinct, and all know a new wave of such conflict is inevitable. Despite their ruthless approach to war and institution of slavery (which the North frowns on), however, Nilfgaard and its Emperor are not all the monsters nordlings think them. Unlike in the North, non-humans such as elves, dwarves, halflings and gnomes are not persecuted or forced into slums, being able to stand as citizens and need not fear an angry mob inciting pogroms against them. Mages are also not burned at the stake like Redania's current king demands, but do have to abide by strict regulation and use their abilities on behalf of the empire.

There are of course other important locations too numerous to list here; the hardy viking islands of Skellige, the idyllic wine country of Toussaint, the free city of Novigrad on the mouth of the Pontar River, the only two schools of magic in the North at Aretuza and Ban Ard, and of course the handful of Witcher schools where our titular heroes are trained. These and more, however, we must leave you to discover for yourself.

When is The Witcher?

While most of the characters live and events relevant to them occur during the 1200s, lore of The Witcher stretches back over 1500 years, much of which still impacts the lives of those in the 'present'. Most significant is the Conjunction of the Spheres; once every millenia or so, the stars align and portals open all over between worlds in different dimensions. Through these portals, monsters, magic, dwarves, elves, and dwarves entered The Witcher’s world, and the elves say the last one, which occurred only 1500 years ago, is when humans first appeared. Since then, however, humans in particular have expanded aggressively, becoming the dominant force on the Continent since their First Landing some 500 years ago. With their tools of civilization, they have outcompeted elves and driven them into the few remaining forests thick with magic, such as Brokilon and the Moulderwood, while dwarves keep much to themselves in enclaves like Mahakam. To help in their expansion into monster-ridden wilderness, renegade mages created the first witchers about 300 years ago, and at least six schools were created to produce them.

By the mid-1200s, however, witchers and the things they hunt are on the decline. Humans have won the wilderness and turned to conflict between seated thrones, and rather than wandering saviors, witchers are looked on as mutants and the mages who assist in their creation as child abductors. Mobs or other plots have been raised against them in the recent past and sacked likely all witcher schools, preventing the creation of further witchers and making those who roam the Northern Kingdoms today probably the last of their kind. But when a powerful monster settles in near a village or road, an alderman may still take up a collection to hire a professional. The world at large looks ahead to Nilfgaard massing its forces south of Temeria and Aedirn, sending ambassadors and spies ahead of them to prepare for their next northward march.

Why is The Witcher?

I'll do you one better.

So, why come to this wiki and write about The Witcher? I mean, for fun obviously, but why The Witcher specifically instead of any other fantasy setting out there? Well, the above, in short. The particular mix of ideas and tone that the series strives for, and the world those elements create. A world of everyday callousness and tragedy making every small decision to do right that much more noble. A world where magic is uncommon enough that it exists but hasn't taken over a time resembling our distant Dark Age past. A world we can escape into through the lives of 'special' individuals with incredible power like witchers and mages, yet who have to confront interesting challenges because their limitations don't make them demigods. At least, that would be this writer's answer.

I sincerely hope something in all this has pushed enough at your imagination to inspire a thought, some concept for a character and how they might interact with the particular features of The Witcher’s world. If so, I heartily encourage you to write it down for the rest of us to enjoy. To find out just how to go about doing that on our site, please continue to our Manual of Style for guidelines on using our tools to present your ideas in appealing and organized articles.