The Witcher Fanon Wikia:Manual of Style 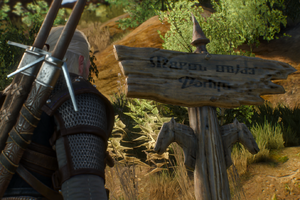 If you've decided to share your ideas for characters and stories on our site, that's awesome! We're glad to have you around. But as you contribute, keep in mind that like any other public space where you're interacting with others, there are certain expectations for behavior we'll ask you to abide by to make everyone's experience positive. Beyond these, there are also certain restrictions on the type of content appropriate for the site. We're all here for fan-written works about The Witcher, and not everything in the history of writing is relevant to or appropriate for that subject. For what we mean more specifically, see below.

These rules pertain to use of the wiki as a platform and your interaction with others through it.

These guidelines are in place to help keep writing on the site focused and appropriate.

There are numerous layout styles used across Wikia's many fanon wiki, and users here are encouraged to experiment and use the format they're most comfortable with. However, for those new to fanon wikis, there is a Character article format we suggest starting out with for a number of reasons: it's used on a majority of fanon wikis, it's closest to the format used by certain canon series wikis, its layout makes sense, and it's easy to use or modify. In order:

Users are free to upload any images they wish to use as representations of their characters, monsters, structures, or article subject matter, but are required to at least mark them as being intended for uses covered under Fair Use law in the US in the Licensing drop-down of Special:Upload when adding to the site. This includes stills from live-action TV programs, animation, game screenshots, and concept art.

If using fan art created by someone else on the web, however, you should do them the courtesy of asking permission to use their work first. In addition, you must add the Image Source template in the Summary box of Special:Upload, or on the File page under a Summary header, as seen here. This will include links to credit the original creator.

Typically, an article should be tagged with all categories applying to their subject matter, using "[[Category:CATEGORYNAME]]. A character article, for instance, will typically include:

A list of all categories can be found here, and any questions about categorization can be brought up to an administrator on their talk page.