What's on your mind?

The YouTube channel Wizards & Warriors recently put out a pretty comprehensive and lengthy video about the Niflgaardian Wars. Its a bit lengthy but goes through both the books and games, and provides a very good resource for worldbuilding and story ideas. I'd figured I'd post it here so that others could be inspired or use it as a resource.

It should be noted, though, that the video does follow a specific canon, trying to blend the books and games together, and in the end has Niflgaard take over the north with Ciri as the future empress.

I have had to protect and repair some articles, due to vandalism. Please take care.

If you need your articles to be protected, let me know. On the other hand, if you have ideas for the School of the Rat, Corvo and Rye Barknor Circus articles, please let me know. Post it in the comments of the articles and I will give you credit for it.

I've noticed that for a lot of the articles on this wiki there exists a sort of shared universe between the different characters by different users. A sort of "Witcher Fanon Universe" if you will.

Anyways, I've done a little bit of looking around, and I'm posting this timeline as a sort of rough draft for those who want to make their own characters. In particular, this timeline will focus a lot on the future of the Witcher world, after the events of the Witcher books and games, based upon what other creators have imagined.

[1] - For the starting point of the human calendar, there is literally nothing known about "the Resurrection" in the official canon. It's clearly inspired by the Christian death and resurrection of Jesus Christ, but otherwise there is annoyingly nothing else I know about it.

[2] - There is no known official date for the destruction of Kaer Seren. I read on this wiki that it was in 1249 (and there are other examples), and so that's what I used for my character. In Jorstadt's article it is much earlier, but that is the only example I can find of that has it differently.

[3] - This gets into some difficulty, because the games offer multiple endings, where either Radovid rules the north, Dijkstra rules, or Nilfgaard conquers everyone. I get the feeling that the general consensus is that Radovid one but his "empire" fell apart and things returned to a new status quo, but I'm sure different authors have different ideas about the future of it.

[4] - Putnam Pitch's article places this at 1380, but otherwise every other example of this places it occurring in 1358.

This is just a putting a bunch of author's own personal headcanon's and fanon's together, but hopefully this can serve as the basis for a generally accepted timeline of the future for anyone who needs it.

Anyone else have any information or ideas about the future of the Witcher Universe?

Greet'ns. I'm thinking about possibly reorganizing the page for my witcher character Jorstadt, and wondering what might make for the more consistent and interesting character. So I'm seeking a bit of feedback from anyone who happens to see this and reads a bit. The reorganization mostly revolves around two events I want to include in Jorstadt's history: the destruction of Kaer Seren, and his attending Oxenfurt Academy.

My first option is to keep Jorstadt's page mostly as it is now. In brief, Jorstadt stays away from Kaer Seren for a time after his graduation as a witcher, and finds himself dissatisfied with the results of handling contracts the way the Griffins taught him. Kaer Seren's destruction occurs, and Jorstadt comes to believe their methods and inflexibility are what led to conflict. Thus, the end of the School prompts him to try a new method and he begins attending Oxenfurt University to learn more about social customs.

The alternate thought I have, which I can't shake, is to have Jorstadt attend Oxenfurt before Kaer Seren's destruction. He starts out on the Path, finds the knightly approach the Griffins teach doesn't always make for the best result, and attends Oxenfurt to get a better understanding of humans and society. After, he returns to Kaer Seren and tries to pass on these lessons, but it clashes with the traditionalist Griffin master witchers. It's possible in this time he also mentors some younger Griffin characters, if anyone's interested in that sort of thing for their Griffin witchers. Soon, however, he's banished from the keep because of his refusal to abide the School's teachings, and is thus not present when Kaer Seren is destroyed.

Either of these sound more interesting than the other? Might also be worth bearing in mind I intend Jorstadt to later go back the other way later in life: he starts to see resentment take over the last witchers as they die off, and the consequences of their absence with monsters resurging and butting up against human civilization. This makes him start to see a value in the old knightly codes; evil lurks in the darkness, and someone must confront it. This leads him to found a new School of the Owl early in the 1300s, maybe late 1290s.

Let me know any preferences one way or another; I might just start up yet another Witcher 3 run-through sometime, and that'll doubtlessly pull me back here once again.

After the Witcher Slaughter, only a few of us remained.

The Continent decided that they don’t need Witcher they don't need us.

They organized a hunt, anyone who had seen found or killed a witcher got a handsome reward many of us died the few that remained went into hiding. One of us sent a letter: “for those of us who remain, we have to stay together, we have to survive we have to rebuild.” I think most of us were skeptical about it but I showed up at the meeting place were now our main fortress stands. From what I know not all made it but at least 4 of us did

Eclipy, Jiro of Rivia, Oracle, and Simple of Toussaint

This is how our story begins.

Hey I was reading quite a bit on the far east and it sounds like an amazing campaign I wanna run for a solo for my friend who loves the witcher as much as I do. However, with all the added places, cities, schools and new regions its hard to piece together what it all looks like. Does the person who originally created the post on the far east have the sketch map he talked about or would someone else have a map depicting the far east please?

Hello, any and all around this little corner of the internet. Just wanted to give fair warning (like what I ought to be doing as an admin) that Fandom, the company which provides this platform, is going to roll out (another) needless rearrangement of the site layout. Having a look at the preview, it'll probably break a few things which need fixing, and create bugs we'll just have to wait on them to fix. Not an awful fate, but it's certainly a needless irritation for a group who just want to post fan characters.

At worst, it'll mean a few days where the site has a different color scheme while I work out kinks and maybe re-select/reupload backgrounds. My goal is to keep the site's aesthetic mostly as it is, with a color scheme reminiscent of Witcher 3's inventory screens. If there's something you'd like me to try and include in that look, like a particular infobox setup or convenient table of some kind, let me know with a comment here and I can investigate if it's possible.

Title. I have no idea for what to name my custom witcher school. It is focusing on heavy armor and magic. It is based in Skellige.

Watching the tenth episode of love, death and robots, 'Shape-Shifters' made me think about the military applications that therianthropes could have, what if armies started recruiting and selectively breeding them to make perfect soldiers or there could be an emerging nation going about this approach? Thoughts?

When i try to upload a picture. I made a Witcher School map but it won't let me upload it. 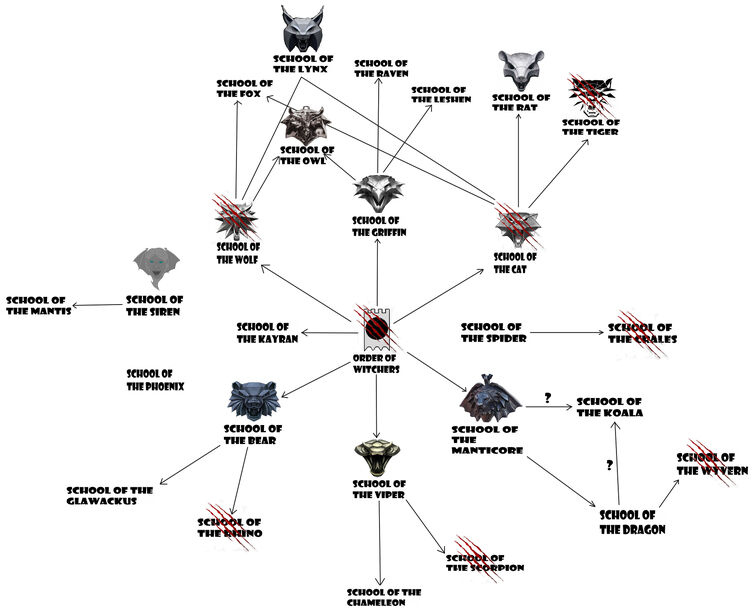 That I need to get on to communicate with the other contributors for the wiki to correlate any lore I try or plan to add or modify?

Is there anything from the lore that points towards evidence one way or another?

I thought up some additional signs to supplement the witcher's sign set. Shadi, Volun, Runa, Vorg, Vintyr, and Moahk.

Volun: Would produce bolts of electricity from the witcher's hand, its alternate form would have a chain lightning effect.

Runa: Would produce a light from the witcher's hand which would magical translate runes or magical writing, its alternate form would allow witchers to inscribe runes in any surface with their fingers.

Vorg: Simlar to Quen but able to be walked away from by the witcher useful for producing a barrier to block one entrance so the witcher could defend a different entrance point, its alternate form would create a selective barrier that would forcefully sling back any hostile or unwanted forces that tried to cross it.

Vintyr: The exact opposite of Igni, Vintyr would produce a flash freeze wave of ice, its alternate form would shoot a sustained blast of ice and frost.

Moahk: Would produce water, and could be used for survival situations. Its alternate form would produce pressurized burst of water similar to modern day water hose blasts.

I notice its got a 'contraeffect' section with symptoms, whats that about? Is that if a witcher takes to much or if a non-witcher partakes? its not clear

I would like to add a broad race to the wiki, who do I run my idea and data by for approval, don't want to add anything that steps on anyone's toes or lore.

Here is a list with the changes I think should be made to the wiki and some other opinion.

- New infoboxs like that of the characters and castles for the rest of things. Witcher schools, countries, etc..

- Fix the infobox of the character so that images of the Coat of Arms can be uploaded.

There are some articles, made by the creator of this wiki, that are traced from the Witcher wiki and do not fit with the purpose of the site. It would be nice to be able to remove them and those of a character to be able to edit them to fit them in the wiki (Respecting what the author has written, of course).

The use of images from other media than edits or original artwork does not convince me.

For example, most of the articles that I have made ( With the exception of that of the School of Scorpion ) the images are original material of authors ( With their respective credit ) and I think that would give a plus of originality to the site if we use that, instead of images from other media to give an idea of something. I say that for articles that have images like that. In my case, Putnam's article for example are artworks of several artist friends that I ordered in his day ( Also Tubiel or Basilia ) or edits ( Zivor ). I think that those of us who don't have an image of our own to illustrate should be left without it until we find it.

Thank you in advance for reading me.

Keep up the great work!

This is the place to talk about your favorite topic, to share news, theories, ideas, and to connect with others.

To learn more about what you can do here, check out community.wikia.com/wiki/Help:Discussions

If you're an admin on this community, read more about how you can customize your Discussions and set up guidelines for contributors: community.wikia.com/wiki/Help:Admin_and_Moderator_Tools_in_Discussions